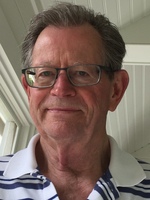 John (Jack) Hampton, 79, died peacefully in his sleep on June 13, 2022. He was a brilliant, funny and kind man who enjoyed a life well-lived.

Jack was born in Jersey City NJ to John (Jack) and Ann Antonaccio Reilly. He went to MacArthur High School in Hollywood FL where he was President of his Senior class. Upon receiving an ROTC scholarship, he graduated from Stetson University in DeLand FL, with a BA in History. He married his college sweetheart, and they moved to Germany where Jack was stationed for two years. They returned home and a short time later, Jack served in the US Army in Vietnam as an Infantry Captain.

After his service, Jack completed his MBA & DBA at George Washington University. He taught at Towson State University and George Washington University where he became Chair of the Finance Department. Always up for the next adventure, Jack & his family relocated from Towson MD to New Jersey where he became the Senior Vice President of Marine Transport Lines in New York City. Missing the world of teaching, Jack returned to a career in academia as the Dean of the School of Business at Seton Hall University and Provost of The College of Insurance in New York City.

In 1989, Jack married the love of his life Doreen Tango. The two of them were the epitome of soulmates. The laughter, respect and deep abiding love never ended.

The Hamptons moved to Litchfield CT in 1996. Jack held positons at Central Connecticut State University, SUNY Maritime and became The Executive Director of The Risk & Insurance Management Society (RIMS) in New York City. He was also on the core faculty of the International School of Management (ISM) in Paris, a position he held to this day.

In 2005, Jack’s life came full circle when he became the Endowed Chair of Risk Management at St. Peter’s University in Jersey City NJ, and most recently named the Director of the Sports Management program with courses scheduled to begin this week. Jack loved being a teacher. The consummate problem solver, he enjoyed helping his students and colleagues and witnessing their many successes. He cheered right alongside them while watching the St. Peter’s Peacocks make it to the Elite Eight in the NCAA Basketball playoffs in March.

Jack was a long time "Risk Insider" at Risk and Insurance magazine where he wrote thought provoking articles on current events as they relate to risk management, including a work-in-progress that will always remain on his laptop. He authored over 32 books, including textbooks on finance and risk management and books on revitalizing higher education.

A traveler at heart, Jack made it a priority to reconnect with friends and relatives near and far especially Bob Smith, George Shafer, Robert Closkey and Joan Coll. Attending his high school reunions was always a special treat.

We will miss Jack’s unmatched wit, subtle sense of humor, impish smile and sheer joy of life. A bright light has dimmed for all who knew and loved this man.

Visitation hours will be held at the Thurston Rowe Funeral Home in Litchfield CT on Sunday, June 19th from 2:00–4:30 pm. A cocktail reception to celebrate the life of this special man will take place from 5:00-8:00 pm at the Litchfield Inn in Litchfield CT.